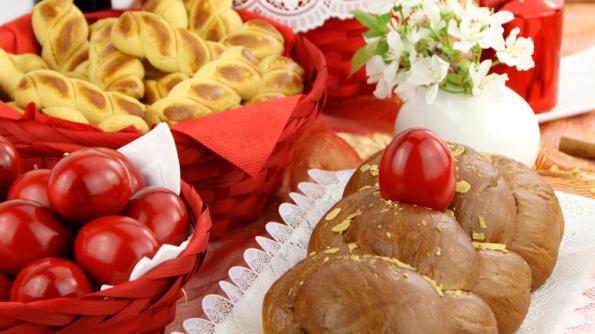 Greetings, fellow readers and Greece enthusiasts! This year, Orthodox and Catholic Easter have the good fortune to land on the same day (April 16th, this Sunday). However, Orthodox Easter (pas-ha in Greek; spelled pascha) is celebrated a bit differently than its Catholic counterpart. In this edition of The Holiday Chomp, we’re going to look at the special foodstuffs behind this beloved holiday (prep your grills!).

After a long and cleansing Lent, Orthodox Easter is celebrated with a hearty meal of grilled lamb and associated meat dishes, as well as a special and beloved bread called tsoureki. Greek Easter is generally known for being savage and delicious, so leave your politeness at the door and dig in!

The star of the pascha table is whole lamb slow-grilled on the spit over an open fire.

Pre-spit, the lamb is washed thoroughly and rubbed with a mix of salt, pepper, oregano and lemon juice inside and out. The spit is inserted through the lamb, and its limbs are tied with twine or soft wire. One lamb weighing between fourteen and twelve kilos (an ideal weight) usually requires around ten kilos of charcoal, which take about half an hour to come to become embers. Firewood, if used instead of charcoal, will take an hour to become a suitable fire. Whatever fuel is used, the lamb needs a standard three to four hours to cook to perfection. The ideal lamb is moist and tender inside, with a thin, crunchy shell of skin (Greek Boston has a quick and easy guide to roasting the perfect pascha lamb).

In true Greek tradition, all parts of the lamb are to delicious use! One beloved appetizer of the pascha table is kokoretsi, a roll made from pieces of the lamb’s organs firmly wrapped in its intestines. The filling usually includes pieces of heart, lung, sweetbread and kidneys (liver is often added as well, but be weary with its inclusion as it tastes bitter when cooked). Preparation of this divine roll must begin a day in advance, but, trust us, the results are well worth it.

Firstly, the organs are washed, cut into bite-size pieces, and refrigerated in a spice mixture of salt, pepper, cumin and coriander. The intestines take time to be cleaned properly; water from a sink is run all the way through them several times, and, for full disinfection, they must be rinsed inside-out as well. When drained, they are left in a bowl with lots of cut lemons. The organs are then carefully speared onto a spit in alternation (one piece of lung, one piece of heart etc.). The intestines are then tied to one end of the spit, and woven tightly around the organs in a crisscross formation, from end to end and back again, until the full length of the intestines have created a sturdy outer layer. The finished creation is then left on the spit overnight in an upright position, to drain its liquid (Cook Like The Greeks has a detailed recipe for kokoretsi. Note that some cooks cover the organ pieces in caul fat before wrapping the intestines around them, to secure them in place).

On Easter morning, the kokoretsi is roasted until its juices have dried from the inside. It is served as a pre-lamb appetizer, along with magiritsa, a soup with cubes of the lamb’s intestines, liver and lungs, and lettuce leaves floating in an avgolemono-like base. Avgolemono is a traditional Greek soup/sauce, made from a thick base of egg and lemon drizzled with rice (a magiritsa recipe from chef Diane Kochilas is as authentic as it gets—she even includes an option for using lamb shank instead of organ meats!).

And, finally, the loaf of this special day—tsoureki, a sweet bread eaten during various holidays of the Greek calendar, but especially on pascha, where it is often bought with a dyed red egg in its dough. The tsoureki is made with mastic gum, giving in a chewy yet fluffy dough, and brushed with a thin outside layer of egg yolk and milk to give it a glaze-like sheen.

Red eggs are a classic symbol of Orthodox Easter. These eggs are not eaten, but dyed red supposedly to symbolize the blood of Christ. On Easter Sunday diners crack the tips of their eggs against each other’s, saying in turn “Christos Anesti” (“Christ has risen”) and “Alithos Anesti” (“Truly, he has risen”). The “winner” is whosever eggs can stay intact through the most blows (a prospect that has become the subject of many a childhood argument!) 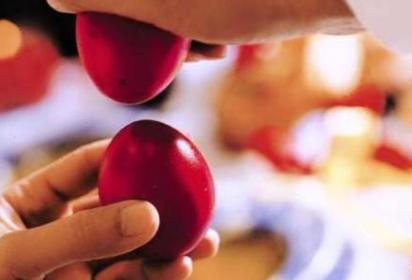 We hope you have a scrumptious pascha, and munch to your heart’s content! Stay tuned for The Holiday Chomp’s upcoming endeavors in Greek cuisine!