As February draws to a close and the last leg of winter drags on, I believe we’re all pining for a bit of spring. Thankfully, sunshine and wildflowers are right around the corner, and with it come the Greek Orthodox spring holidays! After the merriment of Carnival comes the forty days of lent preceding Easter, starting with Kathara Deftera (literally, “Clean Monday” and sometimes labeled as “Ash Monday”). Here with The Holiday Chomp, we’ll take a look at this tasty Monday and examine the highlights of the day’s signature meal.

Kathara Deftera marks the first day of lent and a day of celebration and feasting in Greek Orthodoxy, notably with a time-honored meal devoid of meat and animal products (excluding fish) in the lent tradition. Lent traditionally involves fasting and religious observance, and while Greece is steadily becoming as modernized as other European cities, this holy cleanse still holds power for many.

One of the most beloved traditions on this special Monday is the flying of kites. Step onto the veranda of your Athens apartment, and you’ll see tiny kites fluttering in the distance from the foothills of the city’s major mountains and beaches (weather permitting!).

There are also many unique, local customs on this day, such as the alevromoutzouroma of Galaxidi, a colorful seaside village north of Athens, in which inhabitants fling flour at each other in an epic battle of Holi proportions. 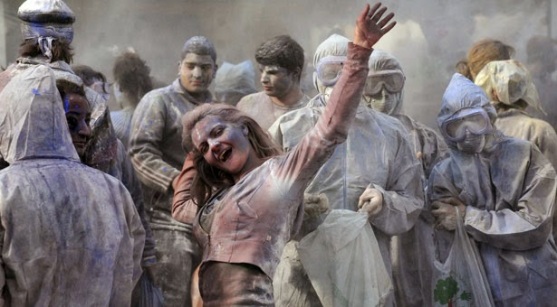 The feast of this day comprises four main stars: the bread (lagana), the seafood, the dip (taramosalata), and the lent-approved desert (halva).

Lagana is a dimpled, round or oval-shaped, unleavened bread baked and eaten only on Kathara Deftera. Legend states that a bread of this sort was first eaten by the Jews during their exodus from Egypt, and the bread has been mentioned by ancient comic playwright Aristophanes, and the Roman poet Horace. To keep the it flat, lagana is made with little to no yeast, alongside the humble ingredients of flour, water, salt, and sesame seeds to cover the bread—some recipes do not even use olive oil. Its texture is rough, but its flavor is enhanced by the sesame. Today, quite a few bakeries merely make a regular white bread in a lagana shape. To detect an authentic lagana, check the inner bread; it should be thick and slightly yellow in color, not fluffy and white like most modern breads.

One of the benefits of this holy bread is its absence of fatty butter or oil, making it less caloric than other breads. It tastes divine scooped in traditional Greek dips, or dipped in the oil/dressing that accumulates at the bottom of salad bowls. 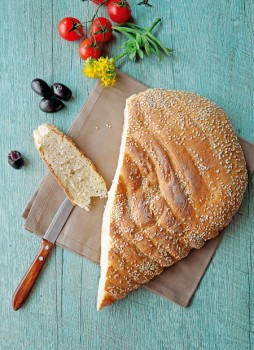 We’ve written before about the wonders of taramosalata, a Greek dip made primarily from fish roe. Taramosalata can be eaten or bought any time of the year, but it has a special place at the Kathara Deftera table. The roe usually comes from cop, mullet, or carp, accompanied by pepper, olive oil, and lemon (sans the oil for fasters). It can be served like so, or combined with a base of bread, potato, or almond for a creamier consistency and less salty taste. Fish roe is very nutritious, rich in Vitamin D and omega-3 fatty acids.

Another dip popular at the Kathara Deftera table is melitzanosalata, a dip made from eggplant and accompanied by red pepper, onion and garlic and seasoned with pepper, salt, and olive oil. 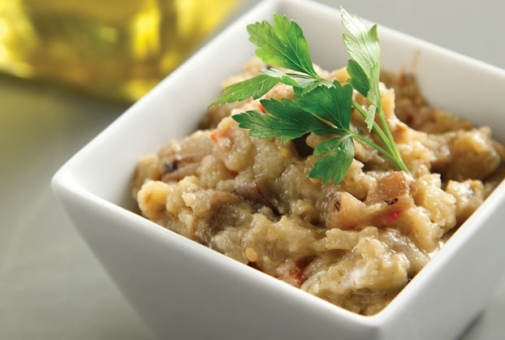 Seafood provides the fleshy chew in this meatless meal. Favorites during this time include octopus, shrimp, and mussels. At Athenian markets you can buy these fresh, or in mixed packs peacefully marinating in olive oil and lemon. Shrimp and octopus can be mixed with root vegetables, such as carrots, pepper, and/or fennel and seasoned with lemon for an interesting, refreshing salad. Mussels are traditionally eaten steamed, served with a lemon or white wine sauce and seasoned with olive oil, parsley and garlic.

And finally, the sweet of the day—halva, a cake or loaf made from semolina or tahini, a sesame paste. Halva is eaten far beyond Greece, including in South, Central, and West Asia, the Middle East, Central and Eastern Europe, parts of Africa, and even the Jewish diaspora. In Greece, modern (tahini) versions of halva can be store-bought, mixed in with pistachio pieces or marbled with chocolate, or infused with any various number of flavors. For the halva-inexperienced, a preliminary taste of vanilla or chocolate flavor provides a mellower prelude to stronger halva flavors, the nuttiness of which can be cut by seasoning it with lemon juice.

In Greece, what is considered the “authentic” or “old” halva, is the semolina version, cooked in a bunt-cake ring and sporting a spongy, moist texture with a rich cinnamon flavor. Perfect with post-meal tea or coffee.

The Holiday Chomp wishes you all a delicious and sunny Clean Monday! Stay tuned for our next update the spring holidays!