Greek food is widely loved the world over, especially in the United States and England, where diners, street carts, and bakeries have introduced many Greek favorites, such as souvlaki, tzatziki, ouzo and baklava. There’s no better place to find the most authentic Greek cuisine than Greece itself. Athens, its capital city, offers the unique opportunity to sample many specialties and local delicacies in one location. Greek food comes in many varieties, so familiarize yourself with its basic categories and you’ll be guaranteed gastronomical happiness, Athenian style.

Souvlakia (or the singular souvlaki) is an icon of Greek cuisine and the most common variety of Greek food found abroad. Souvlakia broadly refers to a collection of grilled meat dishes, including kalamakia, charcoal-grilled pork or chicken skewers drizzled with lemon, kebab, a crumbly, sausage-esque roll of pork, and gyros, a sandwich of thick, grilled pita bread, stuffed with strips of grilled pork, chicken, or doner (beef), along with the optional tomatoes, onions, tzatziki (a dip made from white Greek yogurt, chives, olive oil, lemon and garlic), French fries and sometimes shredded greens (eg. lettuce).

Magirefta broadly refers to any kind of homemade, traditionally Greek dish, usually cooked in a tapsi (deep baking tray) or katsarola (deep pot). Many of these comfort dishes have been staples in Greek homes for decades, and originate in the no-nonsense, naturally based diet of Greek villages. Popular magirefta include pastitsio, a lasagne-esque dish of layered pasta, ground meat, béchamel sauce, and kefalotiri cheese, and lahanadolmades, rolled cabbage leaves stuffed with ground meat and rice and often served with avgolemono, a soup-sauce made from egg yolk, broth, lemon and rice. 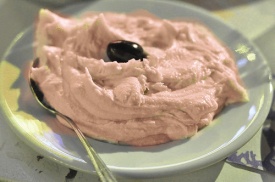 In Greek, mezedes (in singular, meze) can refer to any appetizers, but also refers to a selection of distinctly Greek appetizers served before the main meal or eaten on their own. Mezedes are almost always accompanied by small shots of Greek alcoholic drinks, such as ouzo, raki, or tsipouro. Mezedes encompass a broad variety of Greek tastes, including fish, cheese, meat, vegetables and dips. Popular mezedes include sardeles pastes, salted sardines served with lemon, olive oil, and maybe peppers, keftedes, fried meatballs that can be made of anything from pork to fish to zucchinis, saganaki, deep-fried or grilled kasseri cheese served with lemon, and taramosalata, a dip made from fish roe.

In Greece, pites (singular: pita, literally, “pie”) are a category unto themselves. Pites are often savory and made from the thin, crumbly filo dough (though some, called zimoto, are made from hand-rolled dough), and can be made as single pieces or in large baking trays, referred to as a pita tapsiou. The varieties of pita fillings are endless, though the most famous ones are the tiropita, the cheese pie, and the spanakopita, the spinach pie. Other fillings include ground meat (kreatopita), zucchini (kolokithopita), leeks (prassopita), and even chocolate (sokolatopita).

Greek sweets are just as divine as their savory counterparts, though not as well known outside of Greece. Probably the most well-known outside of Greece is the baklava, a sweet of layered filo and chopped nuts. Baklava belongs to the category of siropiasta, small, Greek sweets drenched in a syrup made from honey and sugar. Other standard Greek sweets include tsoureki, a sweet, brioche-eque bread often eaten during Christamas/New Year’s and Easter, loukoumades, fried balls of dough drizzled with sugar-syrup or honey and thin almond slices (which has existed since the days of ancient Greece) and halva, a cake made from ground sesame seeds and lemon, sometimes dotted with almonds or chocolate.

And thus are the cornerstones of Greek cuisine. Stay tuned for more in-depth looks at Greek specialties, restaurants and more. Happy chomping!